Tonsillectomy and adenoidectomy are two of the most commonly performed paediatric surgical procedures. As with all surgical interventions, tonsillectomy and adenoidectomy are associated with a variety of potential complications. Fortunately, for most children undergoing  denotonsillectomy, complications are rare 1-3. In the last few years, different adenoidectomy techniques have been proposed to reduce morbidity and surgical risk (e.g. microdebrider, Bovie, bipolar coagulation, stripping under endoscopic control, coblation) 4-6. Due to the large number of adenoidectomies performed, surgeons must lay particular attention to the safety, accuracy and outcomes when choosing among different surgical techniques. In previous studies, it has been reported that coblation tonsillectomy is more effective compared to cold dissection, and coblation turbinoplasty also has a good efficacy in allergic rhinitis 7 8. The aim of the present study was to assess the efficacy and safety of an endoscopic surgical technique using the plasma device (coblator©) for adenoidectomy compared to cold curettage.

Paediatric patients (n  =  40), aged 4-16 years old (associated conditions, Table I), with adenoid hypertrophy measured with upright fibre optic examination (> 3 grade) and with recurrent adenoiditis were assigned to 2 groups (A and B), to receive adenoidectomy without tonsillec-tomy, using cold curettage or coblator by the same surgical team. The parents and the patient were blinded as to the surgical technique. All parents gave informed consent before inclusion in the study, which was approved by the local ethics committee. Patient demographics of A and B groups were comparable with no statistically significant differences between groups (Table II). Patients were assigned to the treatment group when they were scheduled for surgery, with alternative assignments to either surgical technique through the first 20 cases. The two surgical groups were homogeneous for age, sex, adenoid grade and rhinomanometry before and after nasal decongestion test (NDT) with nafazoline (Table III). The adenoid grade volume referred to the upright endoscopic view from the superior choanal limit to the nasal floor: 1 ≤ 25% of cho-anal space, 2 = 25-50% of choanal space, 3 = 50-75% of choanal space, 4 = 75-100% of choanal space. After surgery, the following outcomes were evaluated: pain score on first day, days reporting pain, analgesic days (paracetamol), liquid diet days, absent from school days, pain score (days with pain only), days with nausea, days with fever, postoperative endoscopic adenoid grade and intraoperative bleeding. Evaluation was made with a postoperative recovery diary given to all parents who recorded the outcome using a ‘yes’ or ‘no’ answer system for 14 days. Pain intensity on the first day was graded using a 10 cm visual analogue scale, where 0 was ‘no pain’ and 10 was maximum pain. Parents were also asked to report any bleeding episodes. During surgery intraoperative bleeding was assessed by measuring the volume of blood from the suction tube, and surgical time was recorded for each technique. Forty days after surgery, rhinomanometry before and after NDT were performed. Rhinomanometry after NDT gave information regarding the influence of rhinopharyngeal obstruction on overall nasal patency.

The study was designed as two-group, parallel trial to compare two different clinical interventions. Parents and the patients were blinded. Patients were assigned to two groups (coblator adenotomy and curette) of 20 patients each. Statistical analyses were performed using the Mann Whitney test to evaluate the mean differences between each group for age and a χ2 test to evaluate the difference in frequencies for sex. A Mann-Whitney test and t-test with equal variances were used according to the characteristics of data. Statistical differences were considered significant for p < 0.05. All tests were used in the two-tailed version and alpha = 0.05 was assumed as significant level. All data were stored using Microsoft Excel and STATA software.

Transoral cold curettage adenoidectomy (Group A)
Cold curettage adenoidectomy was performed with a McIvor mouth gag and Beckmann adenoid curette size 0-5 depending on the rhinopharynx volume and specific area to reach with the instrument. Adenoid tissue was excised by transoral cold curette, reaching the upper part of adenoid to reduce persistence of tissue. Haemostasis was achieved by compression with tampon soaked with hydrogen peroxide; electrocautery was never used in our standard cold curettage technique to avoid serious and permanent thermal mucosal injury. Digital hand check and mirror visualization was performed to ensure removal of the adenoid and rhinopharyngeal canalization.

Plasma adenoidectomy was performed using the Procise XP Wand system (ArthroCare Corp, Sunnyvale, CA, USA), designed for ablation and dissection of soft tissue, which was malleable to reach the adenoid.

Power level was set to 7-8 for ablation of adenoids, and to 3 for coagulation, depending on surgeon’s preference as judged by the adenoid volume. A paediatric nasal endoscope 0° short (Karl Storz, Tuttlingen, Germany), 2.7 mm diameter was connected to a video camera for direct visualization of the rhinopharynx. A McIvory mouth gag was placed with a properly sized paediatric tongue depressor. The superior portion of the rhinopharynx and the opening to the Eustachian tubes was accessed with the Procise XP Wand malleable, double curved.

Using a 0° nasal endoscope, the size of the adenoid was identified and the border to be reached was assessed. The correct double curve of the Procise Wand was chosen such that it was able to reach all the rhinopharynx areas. Foot pedal ablation was activated when the wand was close to the inferior edge of the adenoid, avoiding direct contact.
The wand in the rhinopharynx was carefully inserted and removed without injury to uvula or soft palate. Endoscopic check of all compartments was performed to ensure removal of all adenoid tissue. The absence of any bleeding or mucosal damage was verified.
If necessary, bleeding areas were coagulated with the wand by pressing directly on the bleeder for 2-3 seconds 10.

The rhinopharynx mucosa sections were prepared according to routine procedures for histological and immunohistochemical evaluation including paraffin-embedding and de-waxing steps to obtain 5 μm sections. These were stained with haematoxylin-eosin (H&E) or Masson’s
trichrome stain followed by fluorescence microscopy of H&E slides (original magnification × 400).

Table IV. Mean and SD for subjective and objective treatment outcomes after surgery.

Children in the coblation adenoidectomy group (group B) reported significantly less pain on the first post-operative day, as well as fewer days reporting pain, analgesic days, liquid diet days and absent from school days (Table IV).
It is important to note that considering the primary endpoint, namely residual postoperative adenoid grade, the cold curettage group showed evidence of persistence of adenoid tissue. Rhinomanometric values before and after DNT demonstrated higher resistances in group A even after DNT. This was consistent with adenoidl tissue persistence after cold curettage, which can cause air flow obstruction even after turbinate decongestion.
Intra-operative bleeding during coblation (2.3  ml) was less compared with cold curettage (30.7 ml). No patient in either group experienced a post-operative bleeding episode requiring clinical examination or readmission.
Mean surgical time was 12 minutes for group A and 19 minutes for group B, measured from the moment the surgeon started the procedure until bleeding control was obtained and instructed the anaesthesiologist to wake the patient.

The histological features of coblation-treated (A-C) and cold curette (D-F) rhinopharyngeal mucosa sections are compared in Figure 1. The sections from a coblation-treated patient show denuded epithelium, abundant fibrosis of the lamina propria and hyperplastic small vessels, along with focal lymphocytic infiltrates. The sections from a cold-curette treated patient show massive lymphocytic infiltration of the lamina propria with preservation of the epithelial lining.

The present results demonstrate the ability of endoscopic coblation adenoidectomy to ensure complete and safe removal of adenoid tissue, due to endoscopic control and the small wand tip, which is able to reach the most cranial part of adenoid and the adenoid intranasal extension (impossible to access with the Beckmann curette). Another benefit of coblation adenoidectomy is the ability to use a single instrument to ablate and coagulate tissue, with significant improvement of patient recovery compared to cold curettage.
The main advantages observed with coblation adenoidectomy, compared with the cold curettage technique are i) the lack of bleeding (abundant bleeding with cold curettage); ii) provides a direct endoscopic view of the adenoid (blind surgery or mirror view with traditional cold curettage);
iii) the ability to reach all the areas of the rhinopharynx up to the Eustachian tube opening (the cranial part of the rhinopharynx cannot be reached with curettage); iv) lower risk of residual adenoid tissue after coblator surgery; v) fewer complications (no cutting blade with coblation adenoidectomy); vi)  it is suitable for patients of all ages, although the decrease of pain intensity and duration is important in paediatric patients; vii) a reduction in the use of post-operative drug and loss of working days for parents due to faster post-surgical healing (as shown by the days reporting pain, analgesic days, liquid diet days, absent from school days).
Compared with traditional cold curettage, endoscopic coblation adenoidectomy also allows selective and precise ablation of the adenoid tissue, which is no longer blind but under direct 0° endoscopic vision. Intra- and postoperative bleeding were not observed, with and ad
jacent structures such as the tubes, nasal and pharyngeal mucosa were carefully preserved. For this reason, coblation adenoidectomy, as reported by others 4, is associated
with less postoperative neck pain than curette/cautery adenoidectomy.
The main disadvantages of an endoscopic technique compared with traditional cold curettage is the need to have a complete set-up for paediatric endoscopy in the operating theatre, the time its preparation and to obtain decongestion of nasal cavity with patties, in addition to a specific learning curve in paediatric endoscopy.
The surgical time was less in cold curettage group, also because an endoscopic approach to the rhinopharynx requires nasal decongestion, secretion suctioning and careful checking, but more accurate and progressive removal of adenoid tissue compared to “en bloc” removal. This data should be considered in surgical planning of operating rooms, possibly scheduling a series of endoscopic coblation adenoidectomies to save time in preparation, even if the improvement in learning curve of surgeons and nurses leads to a reduction in the overall time needed.
Histological examination of the rhinopharygeal mucosa sections from patients of both groups stimulates some preliminary hypotheses. In the coblation group, a fibrosis type healing with a low presence of lymphocytes infiltrating the lamina propria was observed (Fig. 1A-C), which is
compatible with more stable and definitive control of the adenoid hypertrophy. Recurrence is more likely to occur after traditional cold curette treatment, which is followed by a marked lymphocytic infiltration (Fig. 1D-F). A previous study evaluated postprocedural healing on nasal
mucosa in an experimental animal model and investigated the pattern of injury using a coblator, finding that adenoid tissue was replaced by mild fibrosis 9.
Respiratory outcomes after endoscopic coblator adenoidectomy, as we have previously observed after long term follow-up 10, are within the normal range and stable, with
no risk of recurrence (according to our histological results) or persistence of adenoid tissue. Data from the NDT indicate the persistence of adenoid tissue as the main reason for high nasal resistance values in the cold curettage group of patients.
In conclusion, the overall advantages of coblation adenoidectomy, compared with cold curettage, are the decrease in intra- and post-operative bleeding, better safety, precision
of adenoid removal and less injury to adjacent tissues. The most important endpoint of endoscopic-assisted coblator adenoidectomy compared to curettage adenoidectomy is
the reduced adenoid grade after surgery. For these reasons, a coblation endoscopic technique has become our standard approach for all patients, even in primary surgery and in treatment of adenoid recurrence or persistence. 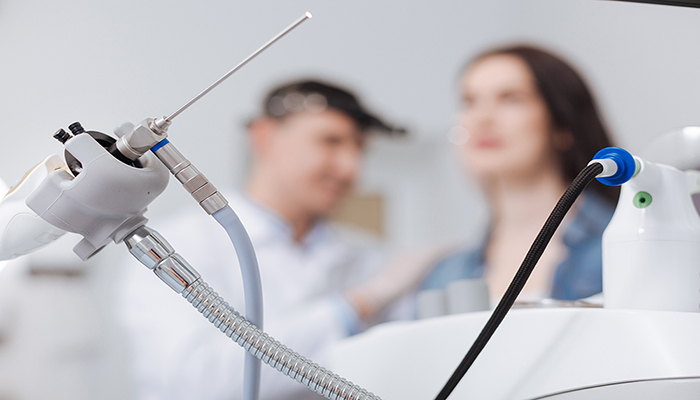 TLR4 and TLR9 Expression in Different Phenotypes of Rhinitis